200 needles are not enough to be called a hoe
200 stars are not enough to be called a moon
Cast divination for 200 stars wishing evil for the moon
What harm can you do to the moon?
The moon is indispensable in the usefulness of mankind
Don’t you know that 200 stars can never be as bright as the moon.
For those who envious of our position and wishing us evil,
let Olodumare who creates the moon deal with them. 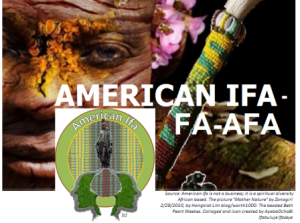 HOW DID THE CONCEPT OF AMERICAN IFA-FA-AFA COME TO BE?

AMERICAN IFA-FA-AFA came to be by watching the people of the diaspora over a period of countless years becoming closer to their spiritual roots in Africa through the yearning to connect with their ancestors. However, despite the yearning there was and is still a barrier. One barrier is distance. During the growth spurt of connecting to our African Roots, a large percentage of the growing numbers of IFA and Orisa devotees and practitioners were and still are financially unable to make the journey home to Africa. We then asked ourselves, “does that mean that we are not African or that we can’t devote ourselves to, or practice our African faiths? Even those numerous of people who were able to go back home, could not do so for an extended period of time, which is needed to become fully involved in Traditional African culture in the way it is done at home.

The question then became, how can we practice our African Roots in the places we live and still maintain the common tenants of our faith to the best of our ability? In essence, we recognized that we can be devoted to and practice our African roots in a foreign land just as our ancestors did which resulted in the survival of our African Faiths in a foreign land, the land in which we live, called America. In so doing, we found that we can express our commonality in the ways we express our spirituality in the places in which we live.

According to the United States 1860 Census, there were 3,953,761 African slaves that represented 12.6% of the total American population. The statue of Liberty and the Statue of Freedom were both created from an African slave woman model which recognized the African presence in The United States of America. The slaves brought their dance, music, stories and faith to a foreign land and after more than 400 years of struggle were finally recognized as AFRICAN-AMERICAN. This recognition came with the rights and privileges afforded to ALL people of the land called America.

WHY AMERICAN IFA-FA-AFA stands for UNIFICATION AND DIVERSITY?

America/Diaspora is truly the land of diversity where ancestors, orisa, and Ifa are widely practiced by the descendants of African slaves. In the America/Diaspora, the Cubans have Lucumi and Santeria; Brazilians have Candomble, Haitians have voodoo, Jamaicans have Obeah and Gullah have Ogeechee and so on. These offsprings of African culture not only blended their cultures in order to survive but they made it comfortable to FIT the environment in which they lived. All of these offsprings have two things in common which are their roots; ANCESTORS and FAITH in the African deities. At the end of the day, everyone wants to live comfortably before going to Orun (heaven) and everyone wants to practice orisa and Ifa life from their ancestral roots of Africa. However, everyone cannot and will not go back home to Africa in order to follow their roots; many are doing it in the places in which they live and afford. Emerson Biakolo in the ‘Nigerian Guardian’ of 28th November 1992 asked: “Do men believe just because they want to or because the object of their faith is credible?” According to Edmund Burke (1790), “People will never look forward to posterity, who never looks backwards to their ancestors. The concept of diversity creates assimilation for American/Diaspora cultures and beliefs which brings a special type of unity, ideas for harmony, a unique mechanical design for spiritual growth and plasmatic substance for long life and the spread of Ifa.

HOW DOES AMERICAN IFA-FA-AFA LOOK BACK TO THEIR AFRICAN ANCESTORS?

Today, the most widely practiced of African faiths in the diaspora are Orisa, Ifa, vodou, obeah, and so on. The most prevalent one is IFA and is called by many other names, since IFA is the system that sets the guidelines for our way of life in so many ways. Ifa is the binary numerical system of odus (proverbs) of which determines our individual destinies. Ifa is the oracle of wisdom, knowledge and messages from Olodumare for an individual’s destiny in life which is governed by the Orisa Orunmila. Ifa have many names that have assimilated into many cultures as follows:

“Ifá among the Edos of Nigeria, Fá among the Fon of Republic of Benin. Eva by Nupes, Ifa in Cuba, USA, Brazil, Trinidad and Tobago, Jamaica, Surinarm and Haiti, Afá by the Ewe of Togo Ephod by Jews, Geomancy by Europeans and Malagasy as well as Ramal or Hati by Arabs. Ifá is widespread in Africa… it is practiced among the Igbos of Eastern Nigeria, the Kamuku and Gwari of Northern Nigeria, the Igbirra in South Central Nigeria, the Jukun of Eastern Nigeria, and all the tribes in the region around the Cross Rivers. Among the Siwah people in the Sahara, Ifá is known as “Derb el raml” or “Derb el fu” It is also widely practiced in Ivory Coast, Ghana, Sierra Leone as well as in Liberia” (Professor Idowu Odeyemi, 2007?). In other words, Vince (2010) stated that the “United States is unique and NOT only is it a country, but it’s also an idea [where] people around the world don’t just dream of coming to America, they dream of becoming Americans.

WHY IS AMERICAN IFA-FA-AFA NOT A CORPORATION OR A BUSINESS?

AMERICAN IFA-FA-AFA is like YEYE Osun/Oshun and fashioned after the nurturing energy of the women who represent the leadership of the Ifa/Orisa way of life in the diaspora. Just like the original Statue of Liberty, we are here as a symbol of the FREEDOM that our ancestors died for in order for us to live. We are also here to claim that FREEDOM in the place we live in order to honor our ancestors’ memories. As we live devoted to and practicing our African culture in the faces of our adversaries, we make ourselves comfortable. Most importantly, AMERICAN IFA-FA-AFA devotees and practitioners are claiming their rights and privileges under the U.S. Constitution that affords all Americans FREEDOM OF RELIGION AND BELIEF under the First Amendment of the Constitution of the United States which is considered a fundamental human right.

Conclusively, your passport says American; not African American, Cuban American, and White American, etc. It says “American” for ethnicity. Regardless, where you got initiated and you live and practice in the Americas/Diaspora…wouldn’t it be nice if we had a recognized tradition in America and our West African roots are the base? Basically, if you are initiated to orisa and Ifa-Fa-Afa and you live in America and you practice in America, then you are practicing American Ifa-Fa-Afa. It doesn’t take away from where you got your initiation – if you are initiated. Many people have been initiated in more than one system (Lucumi, Congo, and traditional Ifa) and they don’t throw one system away for the next, because those slaves’ DNA…47% Benin/Togo, 25% Congo, 20% Native American and so on is their ISESE (oworin gunda) in America. This is why AMERICAN IFA-FA-AFA exists.

[A road leads from here, a road leads from there. When two roads merge, they taper down, cast Ifa for the Erinmọdo tree who who was made king over the trees in the forest. Ifa declared Erinmọdo king.]

May your head lead you to follow your ancestral path and express it in the places in which you live.