This book was written after many years of dealing with the challenges of verbal, spiritual, and physical abuse by men who used the bible and other mythologies to suggest reasons why a woman is less than and man is superior. Additionally, the discussion against misogynistic behavior is important to have in order to bring awareness and provide ideas to empower women’s existence.

The book is about the various views on the mythology of the womb, universe, and God in theory as well as to examine and analyze the different myths. The book also recalls the different female names for God from various cultures, their images, and symbols.

This topic is important to my life, my children’s lives, my godchildren’s lives and to others’ lives because it provides the idea that the womb is to be respected and why. I realize that this is not an easy topic to discuss because of an individual’s religious conditioning, but it is necessary to point out the domination of one gender over the other causes an unbalanced environment. An environment that is hostile, full of chaos, and violent where life becomes meaningless and unworthy of existence.  I wish respect for God the womb, the universe, and spiritual beings.

This book assist in debunking the idea of women and Orisa Odu tales. 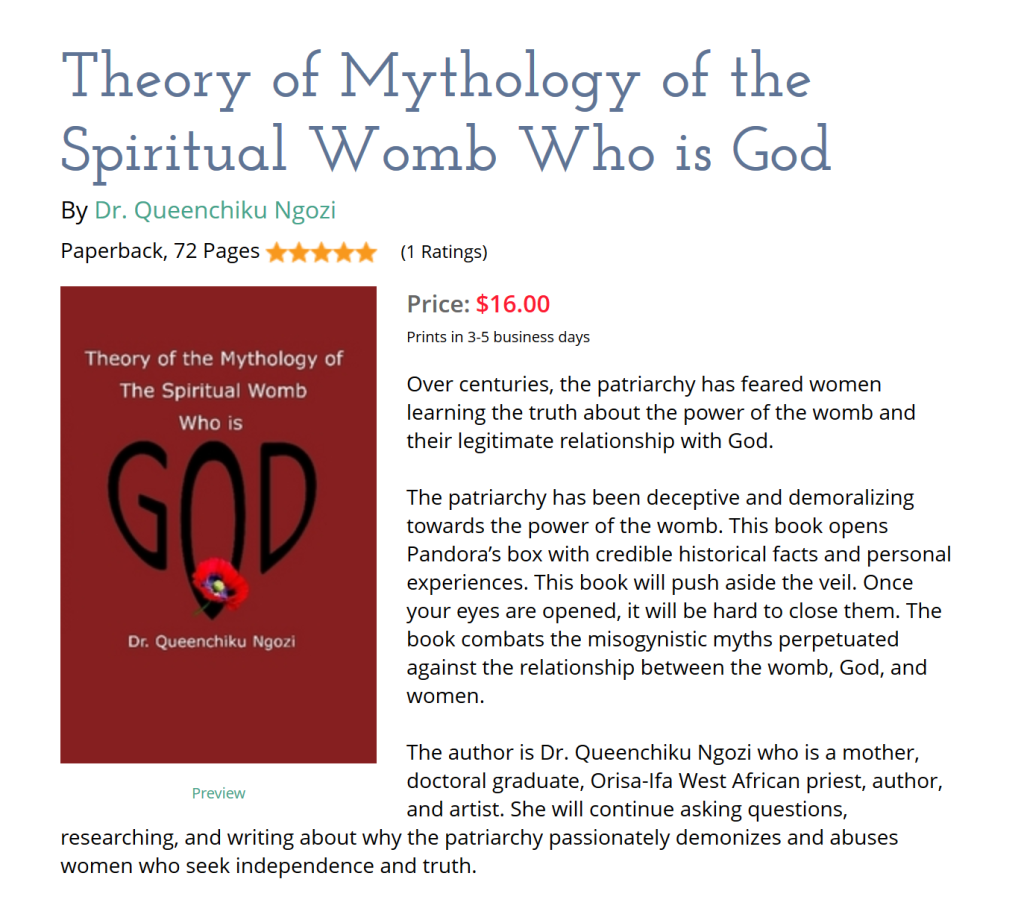 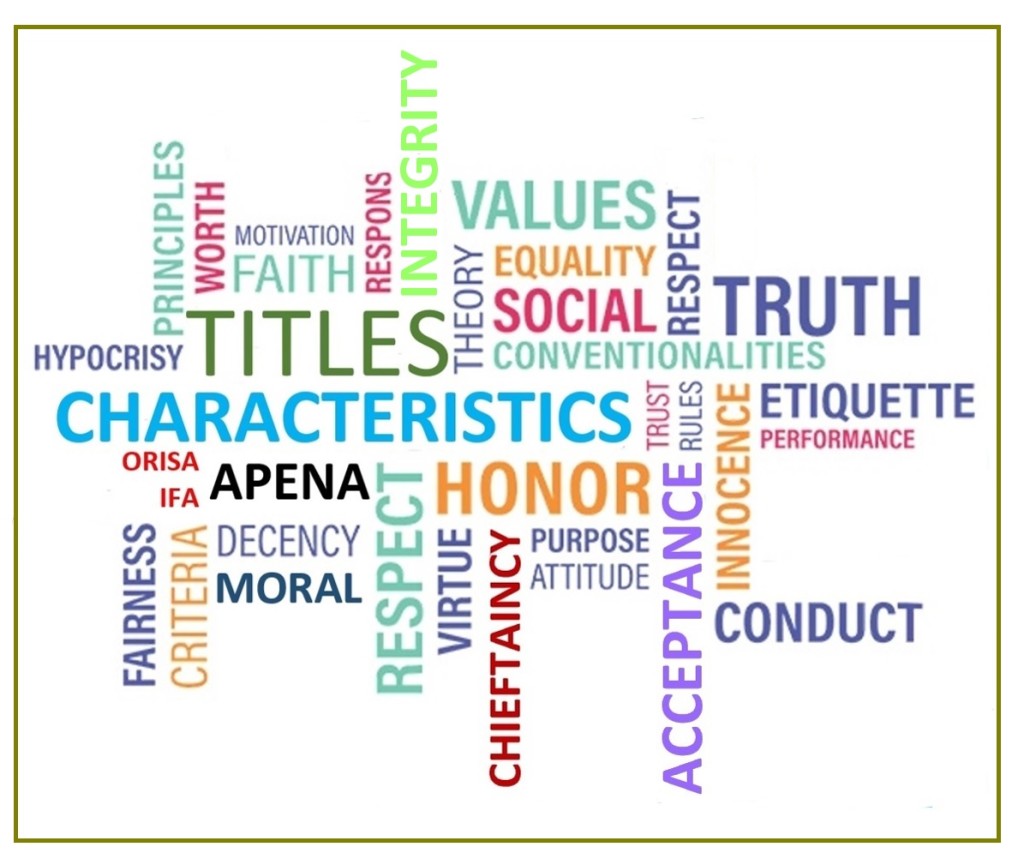 US, Florida: Centuries ago William Shakespeare made a statement, “A rose by any other name …is still a rose.” The rose is characterized as being sweet with thorns and can be described as beautiful, gentle, meaningful, bitter and demonized. The rose, like a title, can be attributed power and character. Significant titles such as Dr., DPhil, MD, DO, PhD, DCN, DBA, DrBA, EdD, PharmD, and so on are true achievements and accomplishments for an individual (Wikipedia, 2019). These titles are earned through studies, research, and long-term education or training. At the same time, hundreds of “titles” are being given out by religious organizations established in West Africa to those within the Diaspora. These titles include chieftaincy, Apena, Oba, and so on. Today, many of these titles (e.g. chieftaincy, Apena, Oba, and so -on) are not earned from studies, research, and long-term education or training. Most are simply bought. No matter the title, it has characteristics, restrictions, and responsibilities.

Traditionally and historically, titles are earned by the individuals who receive and hold those titles (Financial Yahoo, 2019). Titles can identify an individual’s status, position, and expertise (ASAP, 2019).  Some titles are inherited while others are bought and not earned through any effort on the part of the individual receiving them. Titles are a formal communication and achievement. Even so, individuals who have these titles can display bad characteristics. Google Dictionary (2019) described characteristics as “being a feature that helps to distinguish a person or thing; distinctive…and qualities.” In addition, Borgatta (1964) stated that the characteristics of titles “derive from wide-spread faith in education as a means of social advancement as well as from commitments to equality of opportunity and to civic unity.” With titles come a certain level of trustworthiness and an ability to influence or guide human behavior at various levels. In contrast and given the rise of “titles” such as Apena, Chiefs, and Agba, etc. to unworthy individuals, the respect and value of these “titles” have lost their significance within the Diaspora.

There are many titles given to individuals from West Africa which do not hold value in the Diaspora. Part of the reason why includes the fact that many of those title holders display bad character in addition to using these “titles” to dogmatically degrade people in the Diaspora. Ifa says that [a person] should practice good character. They should do so regardless what title an individual may hold. Individuals who hold title are supposed to be role models and they should exhibit good character for the ones who may seek their guidance (Odu Ogbe Otura & Odu Irete Otura). It takes moral principles and values to govern one’s behavior and daily obligations. In Odu EjiOgbe, Ifa speaks about having good character. However, many individuals go to West Africa only to return without good character and a bunch of bought titles that are not respected in the Diaspora. Canada Immigration and Refugee Board of Canada and Nigeria (2012) stated that “most Yoruba chieftaincy titles are hereditary, and others are bestowed upon individuals.” In the early 2000s, Nigerians began selling non-hereditary titles, that is, titles given to the community of strangers also known as members of the Diaspora. This created economic competition among the different regions of Nigeria to sell the most “legitimate” titles to individuals from the Diaspora. These titles are not recognized nor valuable in the Diaspora (Canada Immigration and refugee Board of Canada & Nigeria, 2012).

Many titled individuals in the Diaspora have engaged in negative behaviors towards others and as they do, they tarnish their own reputations (Odu Ika Iwori). This may be occurring because the titles have given a false sense of power to the individual’s ego. The title does not matter what does matter is the spiritual development, leadership, and the relationship between the title holder’s personality traits and their interactions with the people they serve (Khoynezhad, Rajaei, & Sarvarazemy, 2012). When a title is not earned, it is usually setting the individual up for failure. Titles such as Apena and chieftaincy have been the main two titles offered to Diasporians like candy. Dennett (1916) stated that the title Apena is a chief to the Ogboni as well as one of the main positions of the Ogboni cult. Lateju and Oladosu (2012) stated that chieftaincy titles are for chiefs to address any issue in their community and better the “welfare of their communities, monitoring soci-economics and promoting religious tenet.” I am sure there are probably more responsibilities, however they are not documented to explain those titles’ existence in the Diaspora. We live under a different government with different laws and those titles are not needed here. Communities that do recognize them have a small population of believers and followers. In 2015, Ajala posted in Ifa-Orisa-Egun talk Facebook group stressing that the American Araba issued an official memo stating “[some] practitioners of Ifa-orisa are parading with fake title such as Apena, Agbaya, Araba, and chieftaincy…given in West Africa are no longer valid and can no longer be honored [in both Africa and the Diaspora].” In the meantime, several titles have been given and those individuals are displaying terrible behaviors on social media. The major question is where is the “Iwa” character that is “rere” good. A person with Iwa Rere and or Pele is referred to as “Omoluwabi” (Hallen, 2000; Labeodan, 2009). Labeodan (2009) says character (iwa) “is a person’s essential nature and psychic self, as well as the origin and totality of what a person is as an individual.”

Ultimately, the American Diaspora communities have a hard time respecting and reserving honor for the West African titles as mentioned above, especially when the individuals display poor character, misogyny, and narcissistic characteristics. These individuals are called “iwa buruku” (Abimbola, 1975; Labeodan, 2009). Money for titles have become West Africa’s religious cash cow. However, the bought titles don’t change the individual. It only amplifies the individuals’ characteristics to be more of who they are.

Canada: Immigration and refugee Board of Canada, Nigeria: Consequences for Yoruba individual who refuses a cheftaincy title, protection available to those who refuse, 13Nov2012, NGA103996. Retrieved from https://www.refworld.org/docid/50bf31512.htm1

Hallen, B. (2000). To good, the bad, and the beautiful: Discourse about values in Yoruba culture. Bloomington, IN: Indiana University Press

Lateju, F. T. & Oladosu, O. (2012). Chieftaincy titles in Yorubaland and their implication for growth and tolerance among christians and muslims. Lumina, 23(2). Retrieved from www.journaldatabase.info/